108 Heroes slot machine combines elements of the cultures of China, India and Japan. Cherry blossoms are depicted on the background, and valiant warriors and knights will be placed on the reels. Fascinating animation and bright design will give a unique atmosphere that will allow you to plunge into the gambling world of exciting fights.

The reels are occupied by all sorts of warriors, armed with geishas and chests of gold. The music is also permeated with Oriental motifs and carries a certain energy of martial arts. With bets ranging from one to 75 credits per spin, Microgaming’s five-reel game will give you free spins, which are supplemented by a generous multiplier.

In the video slot, you can play with coins from 0.01 to 1, and bet up to five coins in each line. In other words, the maximum bet for each spin on 15 paylines will be equal to 75 credits. 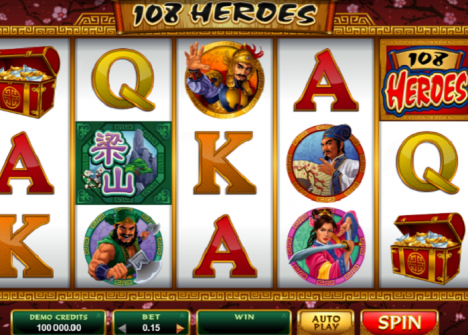 In the 108 Heroes slot, the main characters are four warriors and one geisha. The highest warrior, dressed in gold armor, brings a multiplier of 2500 for five matches, 500 for four and 250 for three matches on the active line. A warrior with a blue headdress pays the same amount for five and four matches, but only 100 for three. Next, in descending order, comes the shirtless warrior, then the geisha, and the lowest paid is the muscular Arab.

The WILD symbol is the image of the game’s logo. It pays a whopping 37,500 coins for five, 10,000 for four, 1,000 for three matches. It also replaces all other symbols except the Treasury and the Chinese symbol. Free spins can be won by matching three or more symbols with Chinese characters-scatter symbols. The number of free spins is always 10, but they can be re-triggered during the bonus game. Moreover, all payouts accumulated during free spins are multiplied by a 3x multiplier.