The history of baccarat

Even those who have heard about this game often have no idea how to play it, not to mention the origin of this exclusive entertainment.

First, there is really nothing exclusive about it. The rules of the game are extremely simple, and the advantage of a gambling house in baccarat is the lowest in all casinos. Its origin is the subject of heated debate, so let’s look into it.

Both the French and the Italians claim that the world owes the invention of baccarat to them. In addition, there is an opinion that the roots of the game go to pagan rituals.

The most plausible version is as follows: the word “Baccara” (which is pronounced BAC – car – a) in Italian means “zero”, and the reason for this is that the most common card score in the game is zero. Italian gambler Felix Falguera is credited with creating the first version of baccarat in the 80s of the 15th century. This game quickly crossed the Northern border of Italy and firmly established itself in France.

Here it was to the taste of aristocratic society and soon became a popular form of entertainment for the wealthy. The French slightly changed the rules, and baccarat became known as Chemin de Fer (railway). This may be the reason why the French are vying with the Italians for ownership of this card game.

So how did the transition from Chemin de Fer to the modern version of baccarat happen? In the original Chemin de Fer game in France, an important characteristic was that players were allowed to control the Bank. In order for the casino to earn money, a Commission was set for each win of the Bank holder. However, this changed when the game moved North, crossed the English channel and ended up in the UK. With the new rules came a new name-European baccarat, in which the casino controls the Bank, and there is also a dealer.

At the beginning of the 20th century, baccarat crossed the Atlantic and found itself in North America, where it quickly went out of fashion. In the 50s, she again went on a journey. However, this time to Argentina, where it became popular in the casino Mar del Plata.

The next stop was Cuba, where the game was called Punto Banco. Further rule changes led to the creation of the American version of baccarat, where players fight the casino rather than each other.

It’s only been a couple of years, and a guy named Tommy Renzoni brought the game to a Las Vegas casino. 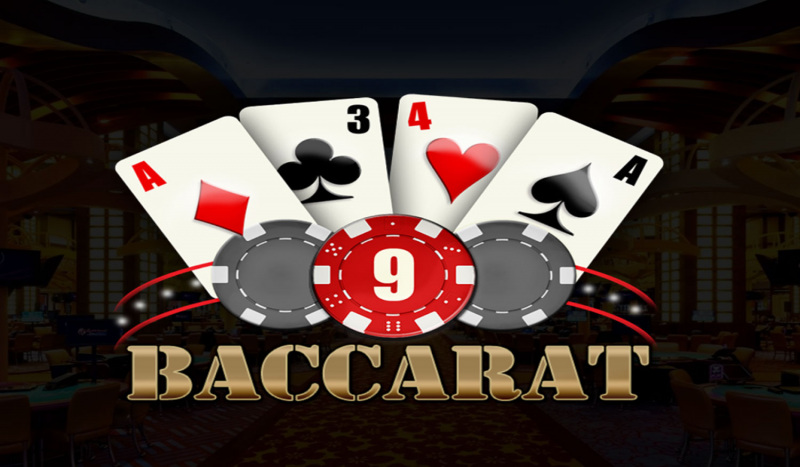 You don’t have to be a jackass to play baccarat. By the end of this article, you can easily move from the “beginner” category to the professional League.

Betting is almost the only thing you do in this game.

So you sit down, count the number of chips you want to invest in the game, and decide how to distribute them.

The goal of the game is to bet on the winning side. In baccarat there are three betting options: bet on the Bank, bet per player and bet on a tie.

The game starts with two hands. The banker and the player receive two cards each:

In addition, if the number of points in your hand is two – digit, then only the last one is considered.

This is a simplified example. The reality is a little more complicated.

This applies to a specific baccarat rule, according to which you need to remember every time you place a bet on a banker or player.

If the sum of points of the first two cards is equal to 8 or 9, the player who manages to reach such a score (this is called a “natural victory”), and becomes the winner in this game.

In this case, the cards are no longer dealt, and the bets that were made at the beginning of the whole action can be cashed.

When do I need another card?

If no one is able to get a “natural victory”, then you may need another card. All because the player (who enters the game first) has a total of only 6 or 7 points.

What about the banker? This is where things start to get complicated. If the player does not need a third card, the banker remains with 6 or 7 points and draws a card in the range from 0 to 5.

Bet on a draw in baccarat

Baccarat has one feature-sometimes it may not be a winner.

Popular side bets in baccarat

This side bet is available in most gambling establishments. If the banker and the player get 6 combinations and 3 cards, you can get a payout in the ratio of 100 to 1. However, you will only get 8 to 1 if there is only one combination. The advantage of the gambling house in this game is 13.7%.

Side bet without Commission in various casinos. This is a winning six and is considered a bet on the banker’s combination. This bet gives the player an advantage in the amount of 2.43%. You cannot make a bet that is more than 10% of the banker’s bet. This is one of the side bets with the highest RTP score. The advantage of the gambling house is 1.11%. The payouts here are 18 to 1.

If the banker’s winning combination totals 6 points, the payout ratio can be 12 to 1. This is a side bet with the biggest advantage of the gambling house. The proposed payout is 29.98%.

This bet can be made on both the banker and the player if you draw a Queen or king in the first two cards. Here the advantage of the gambling house is very acceptable – 2.13%. The available payout is 75 to 1 for a king and Queen of the same suit. For cards of different suits, the payout is 30 to 1.

Dragon 7 is popular among Chinese players. This is a bet when the banker gets a winning combination of three cards with seven points. The payout ratio will be 40 to 1. A side bet will increase the gambling house’s advantage to 7.61%.

Recall that baccarat has become one of the main sources of income from the mass segment of the gambling industry in Macau in 2018.