It is not an easy task to understand all the nuances of ancient Egyptian mythology. The religion of Egypt was formed over many centuries, absorbing the legends and traditions of the inhabitants of different regions. Accordingly, the Egyptians did not even have a single idea about the creation of the universe. According to one version, the world was created by the God Atum, who arose from chaos.

The Book of Atem slot machine by All41Studios and Microgaming is dedicated to this character. 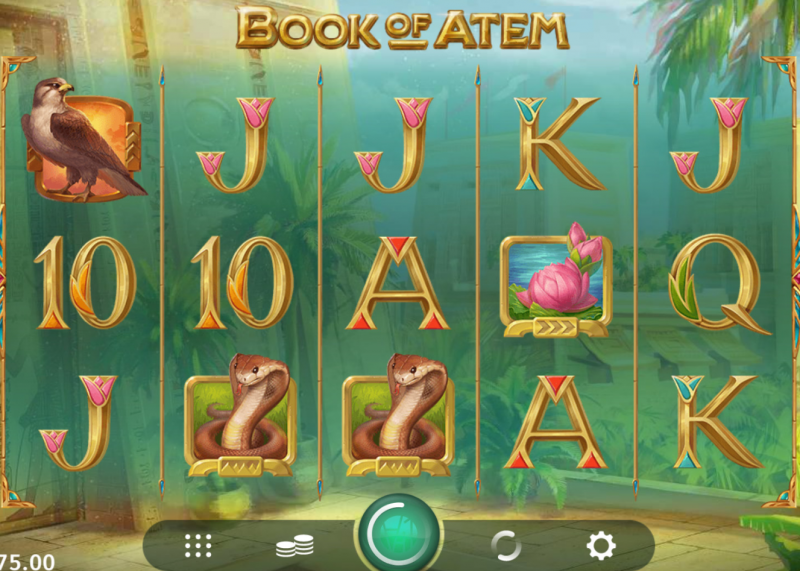 The Book of Atem video slot is a model with five reels, ten fixed lanes for paid chains, and fifteen pictures on the screen.

Bets on the line are always equal: from one cent to two and a half euros for each (0.10 – 25 euros per round). This range is available in the official demo version on the provider’s website. Check the exact limits in the online casino.

To get a win, you need to make a continuous sequence of identical images on any of the ten bands. The chain must start from the first column. There may be several of them, but only the most valuable option on a single line is always taken into account.

The payout amounts are calculated according to two criteria: the current bet per lane and the coefficient of the current combination (from X5 to x5000). There is no doubling round. Credits are immediately transferred to the player’s balance.

There are many shades of green and yellow in the slot design. Some design elements are stylized as gold. Pyramids and palm trees are visible behind the reels. Sounds of ancient Egyptian music.

In the Book of Atem slot machine, there are nine standard images: the God Atum, the Falcon, the Cobra, flowers and symbols of cards from ten to ACE. Identical images are not displayed in stacks.

There is one special symbol in paid spins:

Wild Scatter (ancient book) combines the possibilities of the Joker and scatter. It is paid by dropping anywhere on the field. Winnings are calculated based on the total bet and special multipliers. The book replaces other icons in the chains, but can’t be used instead of Expanding Symbols during free spins. Three or more wilds Scatters also trigger the bonus spins. 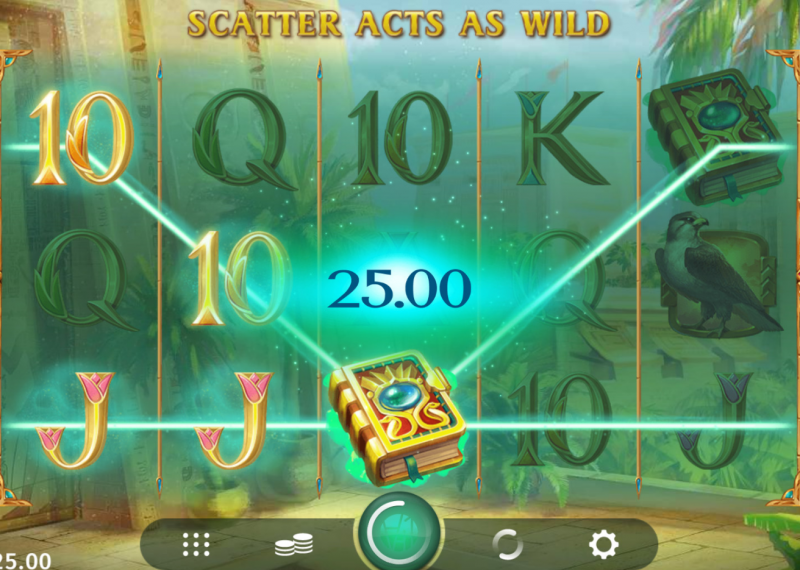 There is no themed bonus game in Book of Atem. The following option is activated during free spins:

Expanding Symbols-before the free spins start, the random number generator selects one image. Every time it falls somewhere on the field, it stretches vertically, taking up the entire column. These icons form combinations on more favorable terms. They can start with more than just the first column. In addition, they can be located not only in adjacent columns.
Wild Scatter cannot be a stretch symbol.

Free spins in Book of Atem

Then briefly about the prize launches:

Free Spins – Three, four or five books start ten spins that take place at the institution’s expense. The client cannot change the bid. It remains the same as in the last paid spin. During the round, the Expanding Symbols described above are active. Free spins can be extended.

The Book of Steam mobile slot machine differs from the computer version in its interface features. In particular, the buttons are located somewhat differently. The rules remain the same. This slot option opens in any browser. All modern Android and iOS smartphones are supported.

It is unlikely that experienced users will be surprised by this model, but it can not be called low-quality.

Let’s highlight the main advantages and disadvantages of the new gambling game.