The first mention of gambling houses falls on the time of the creation in Rome of the first circus, in which everyone played dice and bet on the outcome of events. It is easy to guess that even then there were people who took over the administrative function, which facilitated the process of playing the game and helped them to concentrate. The first casino, as much as possible resembling today’s, appeared in the 18th century. It was then that we finally realized how interesting it is for people and profitable for the state.

Features of the work First of all, the dealer works in two directions at the same time. The first is to accompany the gameplay in card games (baccarat, poker, blackjack), as well as craps, roulette and many others. And the second, not less important-work with people who often fall into a tilt and can begin to blame for their failures anyone.

Thus, the dealer must have knowledge of most casino games and, if necessary, explain the rules to anyone. It is also the dealer’s duty to present the casino in a favorable light, for this it is important to maintain communication with the client, but also to prevent fraud. 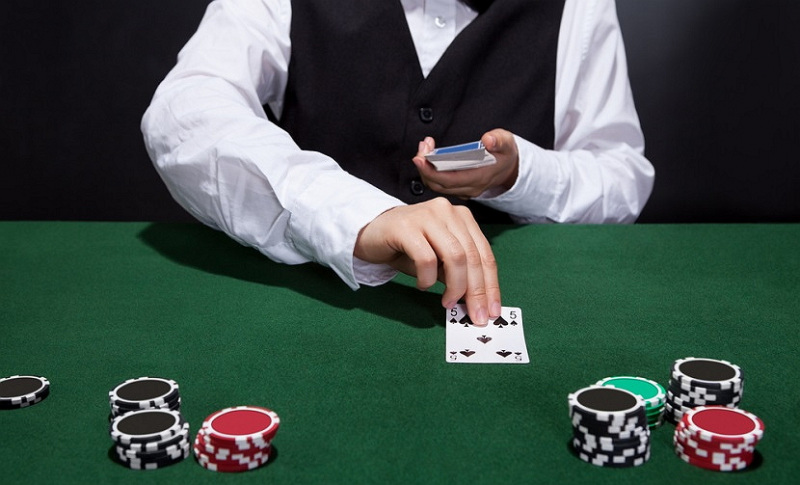 There are times when the dealer is subjected to too sharp an emotional reaction from the losing player. However, it never comes to a critical outcome, since in any legal casino there are security officers, and in addition, everything is monitored by a video surveillance system. For his part, the dealer is obliged to restrain himself and not show the casino in a disadvantageous light.

In the work of the dealer considerable importance is attached to the schedule and discipline. The employee should regularly change tables in order that the management had no reason to suspect him of complicity. Also, employees should not discuss among themselves personal and some work issues in the guest room, separately for these purposes there is a break.

Contacts with visitors outside the game table are not approved, as it is possible that the client will want to benefit from such communication. Also, if the dealer has disregarded such a rule, and there was a fact of fraud in the institution, the employee will be among the first suspects.

Also, in some casinos, all dealers have their pockets sewn up, so that an anxious customer suddenly does not think that an employee has hidden a card or a chip there. It is also not encouraged to wear too extravagant jewelry in the form of expensive watches, stamps, etc.in case of loss of the client, the dealer must be completely neutral, even though the casino has benefited.

The case in the USA when the dealer of a casino was convicted on the fact of collusion with players who as a result fraudulently won a large sum in a casino is indicative. During his work, the amount of losses of the casino equated to $1 million. it is Known that the employee “shone” the necessary cards, which helped accomplices to guess the outcome of the distribution.

When the dealer accidentally made a mistake and the gambling house suffered losses because of it, the responsibility rests with him. Also, check the work of the employee can use the recordings from video cameras, if in a certain period of time the casino began to incur large losses. A separate place is occupied by the work schedule. Often the dealer is forced to work the night shift. To do this, some have to completely rebuild their biorhythm. This is due to the fact that the majority of gamblers visit gambling establishments in the evening and at night.

Knowledge of foreign languages and high communication skills are also appreciated, thanks to which the dealer can find an approach not only to speakers of another language, but also to representatives of other cultures, which is also not uncommon, especially in those institutions where junket tourism is practiced.

Pros of work and characteristics of a good dealer Reasons why many become dealers:

To sum up, it should be said that the dealer must: