For some reason, there are a lot of myths about online casinos. Some of them have an element of truth to them, but some of them are so untrue it’s hard to understand why people believe them. Many people do believe them though, so we figured we ought to try to clear up some of the most common misconceptions.

We would never encourage anyone to join an online casino and start gambling their money unless they were positive it was what they wanted to do. But we also don’t like the idea of people missing out on a great experience just because they don’t know the truth. Unfortunately, many of the myths on this page actually prevent people from playing online. Understandably too, because if just some of these were true then we wouldn’t want to play online either.

If you have your doubts about the legitimacy of online casinos, then this is an article you should definitely read. We separate the fact from the fiction, and will hopefully help to remove those doubts. You may still feel that playing online is not for you, which is fine, but at least you’ll know the truth.

The Games Are All Fixed

This is probably the most often repeated myth relating to online casinos. It’s frequently stated by people who are simply against online gambling as a matter of principle, and they don’t exactly have a balanced view. It’s also something that many players have said or thought at one time or another though, but usually just after they’ve experienced a run of bad luck and are annoyed. They tend to realize that it’s not true after calming down and thinking about it rationally. After all, if they really believed it then why would they be playing online at all?

The fact is that online casinos have no need to fix the games.

Online casinos already have the advantage of the house edge, which makes it certain that they’ll always come out ahead anyway. There is simply no benefit in them cheating their players, as they can offer perfectly fair games and still make a profit. An honest casino is actually likely to make far more money in the long run than a dishonest one, as by gaining a reputation as a safe and fair place to play they’ll attract a lot more customers.

Related Information
Online casinos ensure that their games are fair by using a type of computer program that produces completely random numbers following no specific pattern. We’ve written an article about these random number generators and how they work.

An online casino would be incredibly unlikely to get away with fixing their games in any case. Any place worth playing at is licensed and 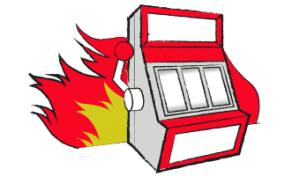 regulated, and this means that their software has to be regularly tested and their payouts regularly audited. The testing and auditing is carried out by third parties, and they would notice if any cheating was going on. This would lead to the casino losing its license, and any reputation that they had built up would be ruined.

With all of that being said, it would not be accurate to say that no online casino has ever cheated its players. There have been some instances where this has happened, but such instances have typically involved rogue operations that players should have avoided in the first place. It’s really not something you need to worry about if you play at reputable online casinos.

Top Tip
To be absolutely sure that you are playing fair games online, you need to play at casinos that you know can be trusted. We advise using only our recommended casinos, as these are all proven to be reputable and trustworthy. They perform very well in other key areas as well.

We’ve heard this many times. Some people genuinely believe that online casinos simply refuse to pay out when someone does win. Bizarrely, the people who believe this also often believe the above myth. This doesn’t make any sense at all. Why would a casino bother to fix its games if it wasn’t going to pay its winners anyway? And if it did fix its games then there wouldn’t be any winners to not pay.

Also
Again, it would not be accurate for us to say that no casino has ever refused to pay a winner. It’s important to understand why they’ve done so though. There have been occasions when rogue casinos have refused to pay for no good reason, and that’s unforgivable, but players are not always the innocent party.

Most of the times we’ve heard about a casino not paying out, the players involved have broken the terms and conditions in some way. Not necessarily deliberately, but that doesn’t really matter. If someone isn’t prepared to read the terms and conditions, and adhere to them, then it’s hard to have any sympathy for them if they don’t get paid out.

Regardless of that, the blanket statement that “winners don’t get paid” is just flat out wrong. The vast majority of online casinos pay their winners out without hesitation. In the rare cases that they don’t, there’s a good reason. Remember the tip we gave you earlier – make sure you play at reputable and trustworthy casinos. If you do this, and stick to the rules, you’re sure to be paid out when you win.