Did you dream of becoming a pirate as a child? Did you imagine yourself as one of the sea thugs ready to board a merchant ship? Did you feel the taste of sea water on your lips, plunging into wonderful fantasies?

For fans of the pirate theme, Quickspin has released the Skulls Up! slot machine which main distinguishing feature is an interesting round of free spins.

The slot has from 5×3 reels with the possibility of increasing the number of cells, from 243 to 1944 paylines and a maximum payout per spin of x3650 from the bet!

Functions and mode of the base game

All symbols, regardless of the cost, play from 3 pieces.

2. The structure of the drums.

The number of lines that are relevant at a certain point in the game is indicated on the right side of the slot.

Replaces any symbols except the special Wild symbol and the Scatter symbol, and has no intrinsic value. This Wild symbol is special.
It replaces any symbols other than Scatter symbols, has no intrinsic value, and activates Skulls UP spins!

5. Repeated spins with the expansion of the reels.

When Flaming Skull Wild is released, repeated spins are triggered, during which the reels increase to the size of 3-6-6-6-3 (24 cells), but the additional cells are initially closed.

Each time a Wild or Flaming Skull Wild symbol appears, one new cell in the additional reel area opens. 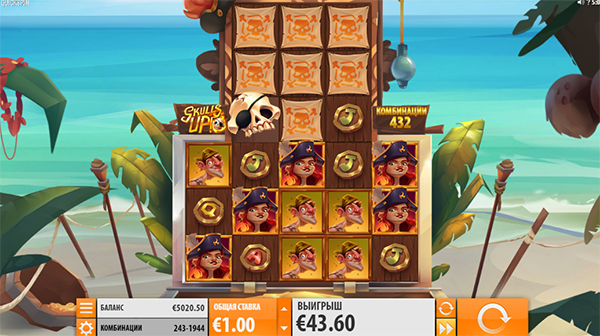 When the Scatter symbols (Chest) appear on the 2nd, 3rd and 4th reels, a bonus game consisting of 6 initial free spins is triggered!

Function of the bonus game:

The bonus game always starts with the maximum number of cells (24), but additional cells are initially closed

In the bonus game mode, additional cells are unlocked only when the regular Wild symbol appears — one symbol unlocks one cell.

Each flaming Skull Wild symbol that falls out activates a re-spin. 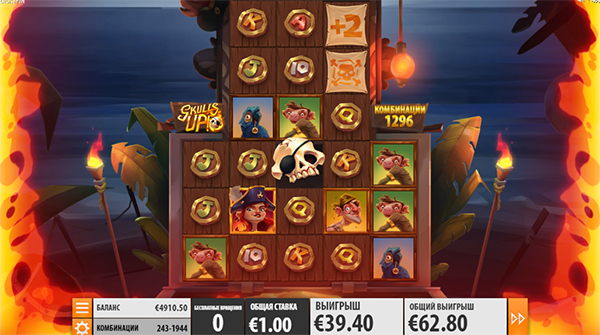 An easy slot with a not-so-bad maximum payout per spin from this manufacturer-up to x3550!

The game implemented a change in the number of paylines, which means that Quickspin very modestly and without too much noise tries one of the possible analogues of the Megaways function. Let’s see what happens next!