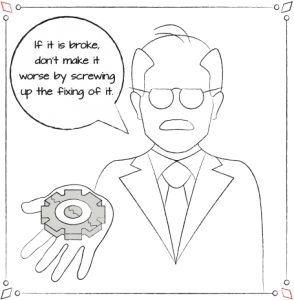 Thinking about a night out at a casino with friends? If you’re like a lot of people, you all play different games. Sure, you might hit the slots or Blackjack tables together. But you also might go your separate ways and enjoy different games throughout the night, congregating back together every now and then.

When you meet back up with your friends, you might be surprised by what you find. You all hit the casino to have a good time. Sure, a win would be nice, but it’s all about entertainment. Unfortunately, gambling comes with a risk of losing. Arriving back at the tables or slots to find your friend down a whole bunch of money isn’t fun for everyone—and it could be downright shocking.

You may be tempted to say something to make your friend feel better or to put a positive spin on the situation.

What happened to all your chips?

The only thing worse than watching your giant stack of chips dwindle like there’s no tomorrow is having your friend walk over and notice the huge dent the dealer has put in your stack. If you see that your friend has lost a big chunk of change, keep your moth closed. You aren’t doing your friend any favors by telling him what he already knows.

Don’t worry, you’re guaranteed to win this next hand.

The gambler’s fallacy states that those who hit a long losing streak are likely to win that next hand. After all, you can only go so many losses before your luck turns, right? Wrong. Everything is completely random. If you lost 6 hands in a row, you aren’t any more likely to win the next hand than you are to lose it. And as a friend, you can make matters worse by telling your buddy that he’s guaranteed to win the next hand. If he doesn’t, his blood will boil.

You really need to learn how to play better.

Losing doesn’t mean you don’t understand the game. It means that luck isn’t necessarily on your side. You can be an expert Craps player. You could be placing all the right bets. But if the dice rolls against your favor, such is life. This isn’t about knowing how to play smarter, so leave intelligence out of the equation.

Is this the worst losing streak you’ve ever seen?

It might be the worst losing streak your friend has ever been on, but why remind him? Doing so will only make him feel bad about the situation. Instead, turn things around by telling him you’ve been on the same wild ride in the past. Things happen.

She might not be at the tables to steer your friend in the right direction, but that doesn’t mean she hates him. Maybe she got stuck in traffic. Maybe she’s on break. Whatever the reason might be, she might show up eventually. So rather than telling your friend that luck is against him, just keep your mouth closed.

Losing streaks happen, but one of the worst things you can do when you hit a losing streak is chase losses. Telling someone who is losing to increase their bet won’t help their cause. Sure, they might win and slowly rebuild their bankroll. But if they lose, they’re only going to feel worse. In this situation, it’s best to bite your tongue.

How much are you down now? 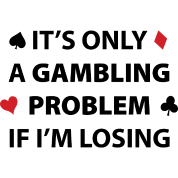 Do you know why casinos use chips instead of actual dollar bills? It’s not just about convenience. It’s all about psychology. By playing with chips, you aren’t as aware of how much money you’re betting. For example, dropping down a $100 bill on a single bet really hits home. But dropping down four $25 chips doesn’t seem like a big deal. Asking your friend how much she’s down just makes things awkward. She might be counting her chips periodically and chances are she knows how much she’s lost. No point rubbing salt in her wounds.

This really isn’t your game, is it?

If you’re all about playing Blackjack, chances are you tell people Blackjack is your game. Maybe you win most of the time. But that doesn’t mean someone who isn’t winning isn’t as great as Blackjack as you might be. If you see someone losing at Blackjack, don’t tell them that this isn’t their game. Everyone hits a slump. It happens.

I hope you’ve still got money in your wallet to eat.

Losing big hurts. But making a sarcastic remark about not being able to afford dinner just makes someone who has hit a losing streak feel awful. Keep your comments to yourself. Or flip it around. Instead of asking them if they have money to eat, try something like, “Hey man, don’t sweat it. Let’s grab a beer and go for a nice steak dinner, on me.”

Losing hurts. Losing when your best friend wins a fortune hurts way more. Sure, it’s great that you won a whole bunch of money—enough to pay for your weekend away. But do you really need to advertise how much money you’re up when your friend has absolutely nothing? No. If you want to be a true friend, pretend that you lost or claim that you broke even. Of course, this is really only doable if you’ve been playing at different tables or slots, but it’s definitely worth a shot.